A Tale of Two Titles 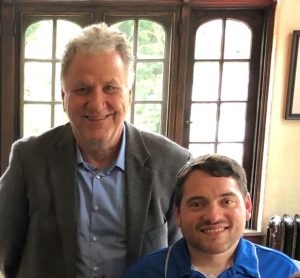 If you follow my blog, you may have already surmised that I am starting to get ready for retirement.  This is actually a result of a long process we have been calling “Succession Planning” since, because I said my exit plan is to die, a certain examination levied a finding on us that I needed to be able to be replaced by 2025.  That was in 2016, and we are now there.

I will be “semi-retired” from 2023 until the day I die (my exit plan, approved by the examiner, is still, indeed, to die). You can read more about it in this Press Release.

But let’s face it.  We owe it to our Clients that, in the event I die prior to my current plan (2063), the company can thrive without my guidance.  (To be honest, as we turn over the company to the younger generation, it is doing even better than it had been when I fully held the reigns).

The intention is that I will take on a new role starting very soon,  How soon will be how well we finish the process of “turning the company over” to Michael Hartke.  Having already run his own business, and having worked in all four corners of the company, Michael, who was instrumental in developing our SIEM, was a natural for the leadership position.  Michael’s new title will be Executive Vice President, and we intend for him to step into the President role somewhere around 2025 to 2026.

But very soon my role will be reduced to “speak, write, hold expectations, and coach.”  The goal is that I will average 25 hours a week.  (25 in 25 is how I actually write that goal).

My new title?  I have been thinking about this a lot.  From “Janitor” to “Writer” to “Chairman of the Bored (that was before I pushed back on the notion that I had to fully retire).  But I have finally settled on the first title I held, way back before we focused on security.  See, in July through October of 2000, when we were “incubating,” the only thing we knew for sure is that we wanted to design a company that helped organizations process and protect the number one asset of “The New Economy” in the information age.  And thus, we called ourselves information architects.  (Actually, there was only one of “us,” – me, unless you want to include my three partners, who called themselves CPAs).

Speaking of safety. Visit offerings.infotex.com to reach out to us and see how infotex can make your financial institution safer!