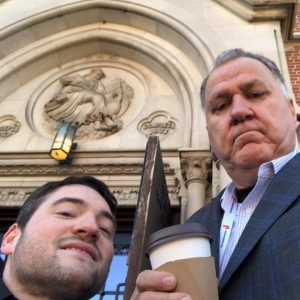 infotex, the Managed Security Service Provider, announces that Dan Hadaway, Founder and Managing Partner of the company for the last Twenty-two years, plans to semi-retire at the end of 2023. Prior to founding infotex in 2000 to serve community banks, Dan Hadaway led software development projects, e-commerce application development, and many network installation projects.

“I think I can get down to 20-25 hours a week by April 2023,” says Dan when asked what he means by semi-retirement.  “It’s time to hand the reigns over to the next generation, so my role will be speak, write, and coach.”

Dan Hadaway has appointed Michael Hartke to succeed him as Executive Vice President, effective immediately. Michael Hartke joined infotex in 2008. He started as a third shift Data Security Analyst (known then as NOC Associates) and was quickly consumed by cybersecurity.

“The first time I met Michael face to face,” says Dan Hadaway, founder and managing partner, “he struggled to climb the three flights of stairs to my office.  He has been climbing hard to exceed my and our Clients’ expectations ever since.  And he is loved by every Client he meets, and every member of our team.”

Michael was promoted to Programming Coordinator during the development of infotex SIEM2, spearheading additional services like Rogue Device Detection and Non-Reporting Devices systems.

In order to to focus on higher-value activities Mike is slowly delegating his duties as a Lead Programming Coordinator to make room for duties as the leader of the team. Or, as Hadaway puts it,  “Michael will be ready to assume control long before I plan to completely retire, which is currently 2059-ish, freeing me to focus on what I love!”

Information Security Officer Sean Waugh says, “I’ve known and worked with Michael for over 15 years and could not be happier for his success and advancement.  He is an extremely intelligent, reliable and ethical colleague and I look forward to our continued collaboration.”

“Michael has always been a pleasure to work with.  I appreciate his energy and passion for the job as well as everything I have learned from him.  His hard work and dedication have paid off and I’m thrilled for his new position. Thanks Mike!”, says  Adam Reynolds Lead Non-Technical Auditor.