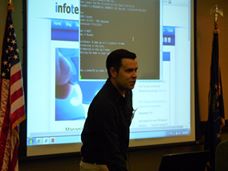 “To deliver a live demo of a hack attack before 90 of your peers is not only courageous, it’s what we’ve come to expect from Sean!”

The IT Security and Risk Management Conference sponsored by the Indiana Bankers Association, held in Indianapolis this past week, was kicked off by a “Hack Attack Live” demonstration.  In this demonstration, Sean Waugh CISSP, the lead technical auditor at infotex, used “Bees with Machine Guns” to attack the Infotex website and bring it down for 4 minutes.  Sean also demonstrated the tools we use as counter-defenses to these type of attacks.

After the jokes made about taking down our site in front of everybody, the reviews were very good.  We thank Sean for helping show our peers how easy it is to implement a DDoS attack, and how ineffective such an attack can be if you have the right controls in place.