…Is there a Test that Covers 9/11’s of the Battle?
Another one of those Dan’s New Leaf Posts, meant to inspire thought about IT Governance . . . .

Twenty years ago two geek-friends and I debated the following question:  “Is there an Audit Test that covers 9/11’s of the battle?”

This started out as:  “which audit test would be the best test to use if you were only paid to do one test of an organization.”  It was sort of a search for the stone that would kill many birds.  At first, the argument would be over “test your firewall” versus “test your users.”  An extremely smart (and now rich) friend of mine maintained that “the one test” should be a test of the firewall. Even now, the firewall mitigates the most risk.  If you could only do one test, it better be the firewall.

But another friend of mine (who is also now rich) would say that your users were the most important control, and “the one test” should be of your users.  This person would win my endorsement by invoking the phrase “awareness is 9/11 of the battle” . . . the phrase I coined in October of 2001.

The mission of a strong incident response program is to create a team that, when and not if we need to respond to the scariest of incidents, recognizes the process as it unfolds.  Testing your incident response team’s ability to respond when they are in a panic is indeed the best form of management awareness because it motivates the team to get behind new controls and manage risk as it arises . . . for risk management and not compliance purposes.

But the Incident Response Test also gives birth to new layers of technical awareness.  I’ve watched network administrators wink when board members and executives realize WHY certain controls are in place.  I’ve seen managers comment they didn’t know certain systems were in place.  We have testimonials from Clients who, drug kicking and screaming in to the conference room, said four and a half hours later: “this was probably the best thing we ever did because now I understand WHY we have all the inconveniences in place.”

“It was like learning why we take our shoes off in the airport,” said one.

A newly hired manger, who is now the executive vice president his bank, emailed his boss, “this was one of those days where I felt I should be paying the bank to 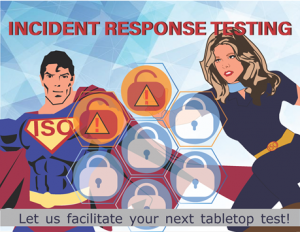 work here.”  Because of what he learned in the test.

So if you want to cover a lot of ground with a little effort . . . effort that you already must achieve for compliance reasons anyway . . . consider hiring a professional to facilitate your next incident response test.  Any audit firm like infotex should be able to do it, and we can do it for both our audit and M-SOC Clients!

So remember:  Awareness is indeed 9/11’s of the battle, and the incident response test is The One Test.

If you are interested in scheduling a test or hearing more about our Incident Response Testing please email Nate Harrell at [email protected].

Also, you can watch the full video we have made below.

Global Cybersecurity Agencies Release List of Most Exploited Vulnerabilities
16 May 2022
The joint cybersecurity advisory includes the 15 most exploited vulnerabilities reported in 2021… An article review.  While a lot of attention is focused on previously undisclosed or “zero day” attacks, some of the most likely attack vectors are vulnerabilities that have been widely known for weeks or even months.  That’s according to a new joint […]
The Changing IT Landscape and Endpoint Detection and Response (EDR)
9 May 2022
Threats are changing, EDR can help us adapt . . . Today’s advanced persistent threat (APT) understands that the IT landscape has changed. In the post-COVID age, more and more organizations have adopted some form of work from home.  While WFH offers many conveniences, it also imparts increased risks. BitSight conducted a 2021 study of […]
The Five Precepts of IT Vendor Management Webinar Registration
3 May 2022
The Five Precepts of IT Vendor Management Webinar-Movie We’re going back to basics on Vendor Management. This webinar will give you a training tool to help out that new person that is starting to take on the gargantuan task that is Vendor Management.
Adam Reads: The “36 Hour Rule” Guidance Summary
2 May 2022
A new way of helping people “read” new guidance… Look for more in the future! To save you time, we are proud to present “Adam Reads” . . . recorded versions of our Guidance Summaries! Below you can find an embedded player for the audio file. If you are having issues with that working, you […]
The IBA Presents and infotex Workshop: Prioritize Responding to New IT Guidance Registration
27 April 2022
You think you’ve finally found stability in your to-do list. Your goals are set, and you’re even making great progress on them all. Audit findings: all addressed. Management requests: Under control. Heck, you might even be able to leave the office five minutes early at least once this year. Then BAM! A press release from […]
Managing Software Supply Chain Risk
25 April 2022
Software Bill of Materials (SBOMs) are becoming more and more important. . . We are all very familiar with one aspect of the software supply chain – updates.  New features, bug fixes, and performance upgrades are a regular occurrence to any device’s lifecycle, however what if these kinds of updates also include deliberately malicious code? […]
“The Real Superheroes” Awareness Poster
20 April 2022
Another awareness poster for YOUR customers (and users).  Now that we have our own employees aware, maybe it’s time to start posting content for our customers! Check out posters.infotex.com for the whole collection! Download the large versions here: Awareness Poster (Portrait) Awareness Poster (Landscape)   You are welcome to print out and distribute this around […]
Pandemic Woes Add To The Cybersecurity Job Retention Struggle
18 April 2022
According to a new survey, more organizations than ever are reporting problems with cybersecurity staffing… An article review. While pandemic related mandates and restrictions are gradually being lifted across the country, many organizations are still feeling the effects in one important area: staffing.  That’s according to ISACA’s annual State of Cybersecurity survey, which asked over […]
Banking Trojans: Menace to the Financial World
4 April 2022
Understanding Banking Trojans… Another Technical Article by Tanvee Dhir! What are Banking Trojans? A trojan is a malicious program that masquerades as a genuine one. They are often designed to steal sensitive information from users (login passwords, account numbers, financial information, credit card information, etc.). A banking trojan is a malicious computer program designed to […]
R7-2022
21 March 2022
Top Seven Risks . . . that small bank Information Security Officers face in 2022! Once again, we compile this list in preparation for updating our normal board of directors awareness training presentation and movies and such.  This list is meant for community-based banks but could apply to small businesses.  How this works can be illustrated […]