Or . . . an Update on Our Battle with Ones and Zeroes!

Or . . . a Rebuttal to The American Monkey Trap!

Another one of those Dan’s New Leaf Posts,
meant to inspire thought about IT Governance . . . .

If you read the article, you already know about my battle with ones and zeroes, and that I am the kind of guy who reacts emotionally to shortcomings in technology.  The article even led to a slogan on a t-shirt:

– Me, in “The American Monkey Trap”

And it led to one of Sofia’s great drawings, of a monkey with his hand “on the banana” in a box chained to a stake.  The hole in the box was just large enough for the monkey’s hand to fit through . . . as long as it did not have the banana in it!

But last weekend, instead of letting go, I embraced technology, and I had an experience that helps me recognize the fallacy in my article.  While I always knew in my mind that we humans have a relationship with technology, last weekend I learned this in my heart.  I experienced it, while aware that I was experiencing it!

You see, a relationship is NEVER a one-way street . . .

WE ALL HAVE A RELATIONSHIP WITH TECHNOLOGY:
If we can define relationships by the words exchanged between the parties to the relationship, like vows in a marriage or contracts in a business partnership, look how technology has fed our vocabulary.  While lamenting words created by the Information Age, like “disconnect” and “reboot,” and phrases like “people would rather read bullet points than text” or “be sure you can explain 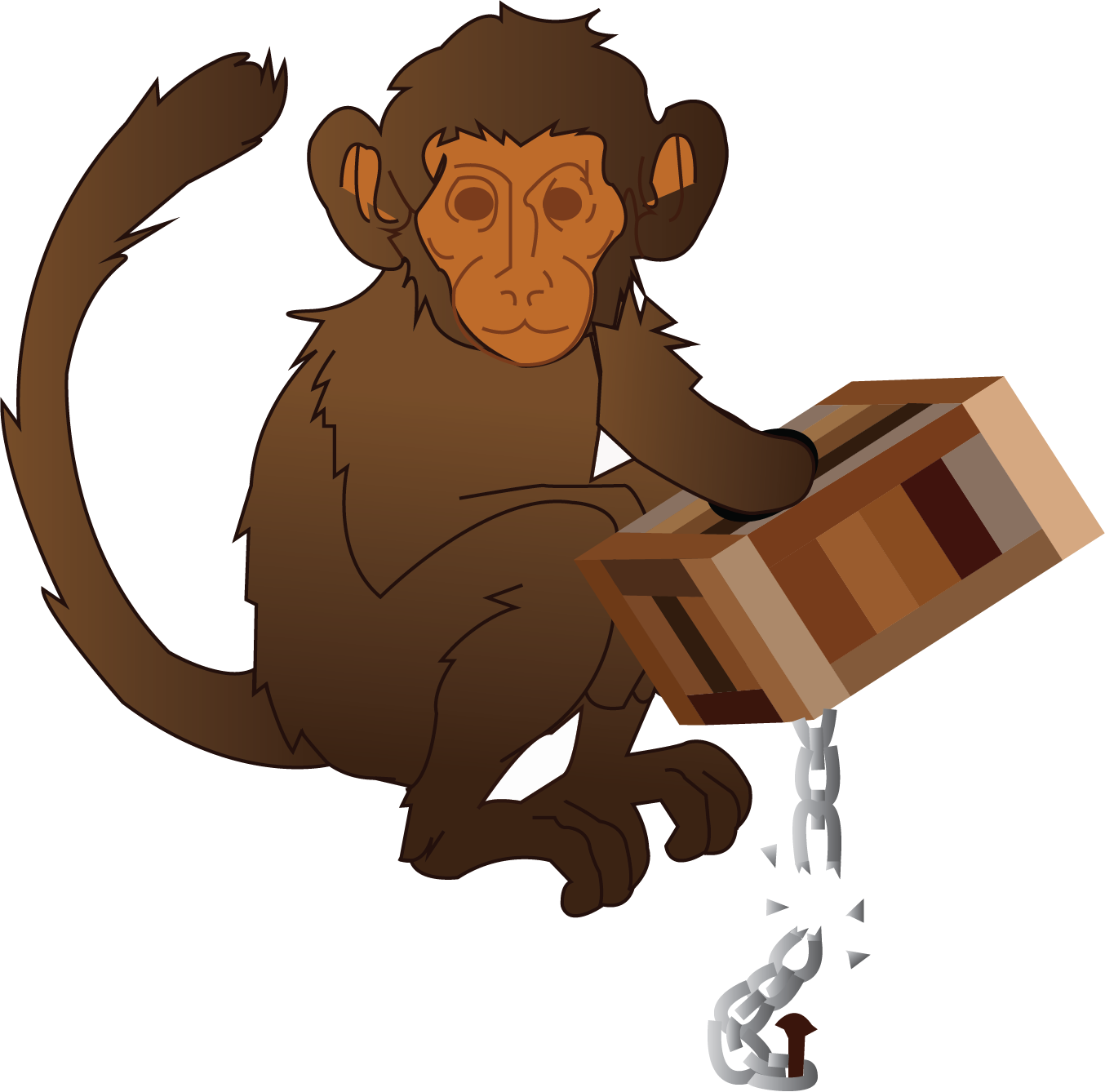 yourself in 30 seconds,” and while worrying that we are more addicted to screens than we are to oil or greed or any of the terrible drugs we read about in the drug epidemics, knowing the hazards are similar . . . . I also now realize that the notion, “you get what you expect,” not only applies to relationships between people, but it also applies to relationships between systems.  And between people and their systems.

And I should NEVER write an article about relationships without bringing up my marriage, so this:  When I got married, I expected to celebrate my sixtieth wedding anniversary, and this year we’ve made it to the halfway point!  Yay!

BECOMING ONE WITH THE MACHINE
Last weekend, accidentally, I learned that this “you-get-what-you-expect notion” is true with technology too.  For I spent last weekend happily becoming “one with the machine.”

For those who don’t come to our infotex jam, “The Machine” is what I am calling the integration of my collection of keyboards, midi music, and sound recording equipment.  For those who haven’t been forced to listen to me talk about what I do when I’m not blogging, “The Machine” fills way too much free time!  But is time well spent!

For almost two years now, I have been trying to integrate my entire music equipment collection, with the goal that at any one point I could record whatever is going on with the press of one button.  Three weekends ago, I became very close to achieving that goal.

The cable I needed to connect my mixer directly to my Macintosh finally arrived, and plugging it in completed the sound check that had failed two weekends ago, when I plugged my guitar into “The Machine.”

I’m not even a guitar player, but it ain’t “The Machine” until it can record a guitar, in the off-chance that my daughter would bring her guitar with her when she sings into ‘The Machine.”

With that one cable, I was now ready to bring everything all together.  I told my friends, “‘I am ready to show you what I’ve been working on.”  I told my wife, “I am so close to becoming one with ‘The Machine’, can you tell?”

But then I ran out of time.

ZEN AND THE ART OF DAYDREAMING
The next two weeks were ruthless time management obstacle courses . . . they were the start of my audit season.  So as much as I wanted to, I could not get myself to “The Machine.” Even if I found the time, I was out of town.  Still, my heart would regularly return to “The Machine,” at least in my mind, the entire two weeks that followed.  I would daydream about the changes that needed to be made to the configuration so that my goal would finally be achieved.

And then finally, last weekend, bliss.

It didn’t come immediately, of course.  I would make a change and, if it didn’t work, I would calmly try a different approach.  But finally, in less than a couple hours into my Saturday morning . . . it was finished.

“The Machine” was ready.  Heck, I’m not even putting it in quotes anymore.

The Machine.  (See, no quotation marks.)

And as I looked through my harmonica box, for the C harp that would accompany my first song on “The Machine,” I saw a little mixer in the box.

WHAT ABOUT THAT MACHINE THAT MAKES MONEY?
This little mixer was supposed to be used to make a microphone possible in my webinars.  And just seeing the little mixer caused a noticeable change in my muscle tone.  See, I do a lot of webinars for infotex, and the number one issue we have infrastructure-wise is that our sound quality stinks.  We’re wanting to fix that by connecting a microphone to my laptop with a little mixer.  And just seeing it caused my muscles to tense up on such a nice weekend.  So when that little mixer didn’t work, I took the American Monkey Trap approach, and cast it aside.  Somehow it made its way into my harmonica box.  Who knows how.  It was cast away, as yet another technology promise broken.

My blood pressure.  Is it rising?

And then I bumped a keyboard connected to “The Machine.”  My heart pulled my mind back to the music that could be made . . . . and recorded . . . . with the press of one button. . . . and I was back to testing The Machine and yes, I was finally able to record that song.  I chose “The Risk Assessment Song,” as the first song I would record with ‘The Machine.”  And once I finish with the editing, it will be posted on the infotex youtube site.  (Assuming Sofia approves, of course!)

The reality did not hit me, at that time.  There was the slight notice of my muscle tone tightening and my blood pressure rising, but then my heart brought my mind back to The Machine.  And for that, I’m glad, because I was able to thoroughly enjoy The Machine.

But Monday morning, when it was time to log into what I now call “The Little Machine,” I immediately switched from the weekend Dan . . . the calm, trial-and-error-is-fun technologist that “became one” with technology . . . to the frustrated-user-Dan that our network administrator has the privilege of knowing (by having to reset passwords).

Because . . . thankfully . . . I noticed the change in tone again.  (The immediate frustration was that the internet was saying “oh no you won’t” to my logging in, and I was starting to worry that I’d be late to a Client meeting).

But instead of “hmmm, interesting, I wonder why I can’t log in yet again.  Very interesting, maybe it’s AT&T?”

I said, “Gosh darn it, that darn ATT.  I’m paying blah blah blah a month and this.  I call em ATT instead of AT&T, ’cause darn it, they never bring the & to me.”

Okay, I admit, I totally cleaned up what I said.

But the part that I didn’t clean up . . . . “I’m paying . . . ” has caused a preconceived resentment in my attitude towards technology. One thing we need to recognize in relationships . . . if we come to the meeting already mad, we need to work through that anger before we get to what even caused the anger.  So why am I angry when I use technology meant to make money, whereas I am totally calm and relaxed when I use technology meant to create art.  The latter actually works far less reliably than the prior, so I can’t claim reliability as the cause.

I had gone from a “no worries, we’ll find another way” relationship with technology to a “what a ripoff, this is wasting my time” relationship.

No wonder technology wasn’t working for me.

THEY ARE JUST ONES AND ZEROES
More importantly, when MUSIC technology didn’t work, it was almost as if my reaction was, “awww, poor thing.  Let me scratch and we’ll find the itch.”  It was almost like I treated The Machine as a patient, waiting for me to heal its disease.

Whereas, when the COMMERCIAL technology “I rely upon” didn’t work, I felt ripped off, frustrated for sure.  And because I was paying attention, I also detected another emotion . . . BETRAYAL.  I paid blah blah, and it betrayed me!!

Most importantly, I felt like it was ME who was the victim.  It was ME, not the technology, who suffered from the disease.

I’m going to continue working on the why, but for this article, I want to share the results of a slight shift in my attitude towards technology, in how things have improved since last weekend.  (I write this on a Friday, trying to get one last article finished before I go back . . . frankly . . . to The Machine).

But due to an attitude shift, I have enjoyed technology much more at work.  I still suffer login issues, but my reaction is more calm.  And I am still adamantly exercising the lesson of The American Monkey Trap (don’t use the technology).  For example, when AT&T says “oh no you won’t” to letting me log in with my computer to read email, I use my cell phone to read email, instead of waste time trying to log in with my computer.

But the difference is, I no longer allow myself to get angry over the fact that I have to switch to my cell phone.  Why?  I think it’s because I now see the technology, not myself, as the victim.

Do I have to keep reminding myself:  “You are getting mad at a software program.  They are just ones and zeroes.”

But by being aware of the notion that I have a relationship with technology, and that you get what you expect, I have been able to be more productive JUST BECAUSE OF THAT AWARENESS.  And the results are empirical.  Fortunately for me, we measure every six minutes of our time at infotex, using The Little Machine, and “authenticating” has actually taken less time this week than prior weeks. Specifically, I am averaging .2 hours per day (so far) logging in this week, where authentication was .435 the three weeks prior.  (Yes, we track authentication as a category, because of my internet issues).

I think the decrease in authentication time is due to a shift in my attitude: instead of seeing commercial technology as my enemy, I’m trying to see it as my friend.

Instead of seeing commercial technology as a “technology promise broken,” I’m seeing it as “The Little Machine.”  And I’m actually getting “the little mixer” out of my harmonica box this weekend. I’m going to find that itch, and my next webinar will star a better voice, through a better microphone.