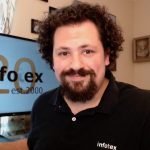 infotex, the Managed Security Service Provider, announced Bryan Bonnell’s promotion from Senior Data Security Analyst to Digital Media Manager.  “He will continue his normal DSA duties on a limited basis, because we want everybody to stay in touch with the Managed SOC,” says his new supervisor, Michael Hartke, Lead Programming Coordinator.  Hired as NOC Associate in 2009, Bryan was responsible for ongoing training of data security analysts as the Senior Data Security Analyst from 2013 to the present, and was also named Keeper of the Sacred Scrolls, a role that has many implications at infotex.  “One of those implications is producing our movies,” says Dan Hadaway, Founder.  “And wow, have the movies gotten better?”

But in preparing this press release, we realize that Bryan’s “invisible touch” has actually gone noticed.  “Since joining us”, says Dan Hadaway, “Bryan has always been in the background, ready to handle what we couldn’t.”  And Dan is not the only one to notice this.  “Bryan is the guy we always catch working at 3:30 AM,” says Hartke, “getting ready for the next day’s meeting.”  And this sentiment seems to be present throughout the team.  “Bryan’s creativity, attention to detail, and top-notch organization skills have been invaluable in copyediting our reports,” says Chad Smith, SOC Manager who was Bryan’s supervisor for most of his tour at infotex.  “His creativity has made him excel at managing our public presence.”

As the Keeper of the Sacred Scrolls, Bryan leads the “continuous improvement process” surrounding the firm’s boilerplate library, audit toolkits, etc.  Public presence and producing movies might sound like fun, but much of Bryan’s work falls in the tedious realm of working closely with compliance at infotex.  “In addition to being a fantastic Data Security Analyst for many years,” says Sean Waugh, Lead Technical Auditor, “Bryan has been instrumental in improving our documentation efforts.”  He ensures the public presence “walks the talk.”

“Bryan has always been ready for work, eager to help, and friendly, and has always dotted every I and crossed every T,” says Adam Reynolds, Lead Non-technical Auditor.  “I’ll second that,” says Matt Jolley, Technical Auditor who also reviews a lot of Bryan’s output and also writes article reviews as Vigilize.  “Bryan is able to juggle so many different things,” adds Matt, “sometimes I think there’s more than one of him, and he’s never too busy to help!”  And Adam Reynolds sums up reaction to Bryan’s promotion:  “He’s a great asset to infotex, both for our Clients and employees, and I’m glad to hear of his promotion. Looking forward to many more years of working with him.”