From industry insiders to straw buyers, nearly 500 people have been arrested in a nationwide mortgage fraud takedown that reflects the coordinated efforts of law enforcement to address the growing problem of crime in the housing industry.

“Mortgage fraud ruins lives, destroys families, and devastates whole communities,” Attorney General Eric Holder said this morning at a press conference to announce the results of “Operation Stolen Dreams.” Launched on March 1, 2010, the multi-agency initiative has led to a total of 485 arrests. More than 330 convictions have been obtained, and nearly $11 million has been recovered. Losses from a variety of fraud schemes are estimated to exceed $2 billion. 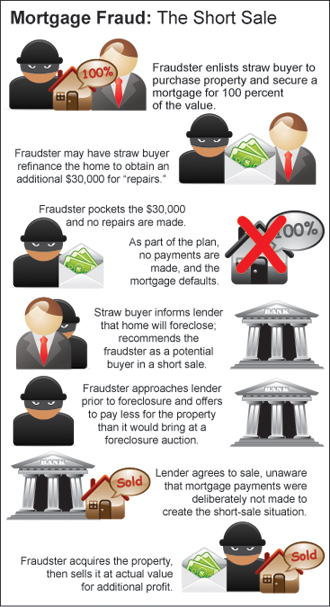 Operation Stolen Dreams is the government’s largest mortgage fraud takedown to date. But FBI Director Robert S. Mueller cautioned that there is still much work to be done. The Bureau is currently pursuing more than 3,000 mortgage fraud cases, he said, which is almost double the number from the last fiscal year.

“The staggering totals from this sweep highlight the mortgage fraud trends we are seeing around the country,” Attorney General Holder said. “We have seen mortgage fraud take on all shapes and sizes—from schemes that ensnared the elderly to fraudsters who targeted immigrant communities.”

To combat the problem, the Bureau’s National Mortgage Fraud Task Force helps identify mortgage frauds such as loan origination schemes, short sales, property flipping, and equity skimming. In addition, we have 23 mortgage fraud task forces in “hot spots” around the country, from California and Texas to Florida and New York. Our investigators and analysts also participate in 67 working groups nationwide that share intelligence and industry data to identify emerging threats.

Unlike previous mortgage fraud sweeps, Operation Stolen Dreams focused not only on federal criminal cases, but also on civil enforcement and restitution for victims. Federal agencies participating included the Department of Housing and Urban Development, the Treasury Department, the Federal Trade Commission, the Internal Revenue Service, the U.S. Postal Inspection Service, and the U.S. Secret Service. Many state and local agencies were also involved in the operation.

“From home buyers to lenders, mortgage fraud has had a resounding impact on the nation’s economy,” Mueller added. “Those who prey on the housing market should know that hundreds of FBI agents on task forces and their law enforcement partners are tracking down your schemes, and you will be brought to justice.”

A Tale of Two Titles
5 December 2022
Dan’s Semi-Retirement . . . Another one of those Dan’s New Leaf Posts, meant to inspire thought about IT Governance . . . . If you follow my blog, you may have already surmised that I am starting to get ready for retirement.  This is actually a result of a long process we have been […]
Dan Hadaway Announces Semi-Retirement and Succession Plan
5 December 2022
PRESS RELEASE – FOR IMMEDIATE RELEASE BUSINESS NEWS Dateline: Lafayette, IN, December 5th, 2022 infotex, the Managed Security Service Provider, announces that Dan Hadaway, Founder and Managing Partner of the company for the last Twenty-two years, plans to semi-retire at the end of 2023. Prior to founding infotex in 2000 to serve community banks, Dan Hadaway […]
Think Like a Hacker: The Importance of The Red Team
28 November 2022
A new study highlights the benefits of looking at your network from the other side… An article review. If you were trying to attack your organization’s network, how would you start?  That’s a question you may not have asked yourself, but experts say it’s something that can help you strengthen your security.  That’s according to […]
Watch Where You Click: Google Ads May Spread Malware
21 November 2022
Google Ads, Gitlab and OneDrive have been used to distribute the BATLOADER malware… An article review. We’ve always believed that “watch where you click” has always been good advice when it comes to security online, however Microsoft is tracking the spread of malware that has been using legitimate websites to help facilitate its spread, counting […]
“Password Trends” Awareness Poster
16 November 2022
Another awareness poster for YOUR customers (and users).  Now that we have our own employees aware, maybe it’s time to start posting content for our customers! Check out posters.infotex.com for the whole collection! Download the large versions here: Awareness Poster (Portrait) Awareness Poster (Landscape) You are welcome to print out and distribute this around your […]
Adam Reads: The “Change Management” Guidance Summary
14 November 2022
A new way of helping people “read” new guidance… Look for more in the future! To save you time, we are proud to present “Adam Reads” . . . recorded versions of our Guidance Summaries! Below you can find an embedded player for the audio file. If you are having issues with that working, you […]
2022 Technology Planning Webinar Registration
1 November 2022
Thanks for being interested in our Technology Planning Webinars! The 2022 annual webinar update on technology planning includes a review of the previous years’ movies that are available, as well as alternative tactics that have arisen from recent conferences, forums, and industry experience. Feel free to invite your entire technology committee! Click the Button to […]
“Halloween Cyber Statistics” Awareness Poster
19 October 2022
Another awareness poster for YOUR customers (and users).  Now that we have our own employees aware, maybe it’s time to start posting content for our customers! In the spirit of October and Halloween we have put together a gallery of our “spooky” Awareness Posters at halloween.infotex.com. Use them to help decorate for the holiday! Check […]
New Attacks Target Multi-Factor Authentication
17 October 2022
Microsoft, Cisco and Uber are among the companies hit by this new threat… An article review.  As more organizations adopt multi-factor authentication to help safeguard their systems hackers have adapted, and several major corporations have been among those hit by this new style of attack.  This new technique, called MFA Fatigue or Push Spamming, involves […]
What to Expect from an infotex Incident Response Tabletop Test Movie
3 October 2022
A Webinar Movie This presentation is intended for those who are planning to participate in an infotex incident response test. Please let us know what questions you have, when we have our Plan Walkthrough and Test Plan Approval meeting!