How to Substantially Decrease (and Streamline) Response Time
Another one of those Dan’s New Leaf Posts, meant to inspire thought about IT Governance . . . .

Given that we have been watching networks since 2000, we have seen a LOT of incident responses.  There is a small, seemingly minor sub-process to incident response, that we have noticed makes the response go much better.  We have found that the Incident Response Team is in a good position to turn lemons to lemonade when an appropriate, streamlined, quick initial response is automatic.

“Because our team knew to broadcast awareness, thanks to your pretext calling tests, we were able to shut down that wire transfer fraud.  It saved us hundreds of thousands of dollars!”

Over the years . . . again, of watching businesses respond to technology incidents . . . we have come to believe in Broadcast Awareness so much that we have added it to our audit checklists, even though . . . as the president of the bank quoted above pointed out . . . there is no guidance requiring it.

So what do we mean by Broadcast Awareness?

“Broadcast Awareness” is the first two steps that all users should be trained to execute whenever they become suspicious about either technology or information.

But when we watch businesses miss their opportunity to turn lemons to lemonade, it is because we see the first encounter send an email to his or her Information Security Officer, and then go back to work.  It’s because we see the entire team create a whole bunch of activity around the fact that there is a virus on a workstation, but nobody thinks to disconnect the workstation from the network.  It’s because time after time we continue our pretext calling tests, or our physical breach tests, for weeks after the first suspicious “shut-down,” and nobody else in the institution is aware of our attack attempts.

Broadcast Awareness is a valuable process to teach.  It only takes up an additional 101 words in your Acceptable Use Policy, if you add it.  Here’s typical policy language:

In the event that you notice activities by other employees, vendors, or customers or you become aware of security incidents, weaknesses, and software malfunctions, or are concerned there may be a virus on your computer, please contain the event by disconnecting your workstation from all networks if possible, then report such suspicions to your immediate supervisor who will help you “broadcast awareness,” meaning that you will inform all appropriate persons so that they will not “fall victim” to the suspicious activity. After broadcast awareness, in the Information Security Officer.

Notice that the above language requires the notice of the “appropriate everybody,” AND THEN notification of the Information Security Officer.  This is essential.  So many incidents are exacerbated because an employee simply emails the ISO and returns to work.  The incident goes un-contained and others fall victim to the incident.

When providing awareness training to users, we go so far as to use the following graphic to illustrate the process: 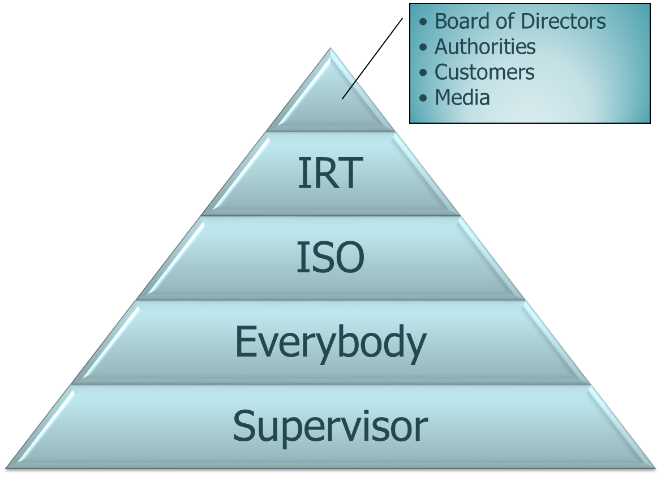 The reason we find this useful is that if users are aware of what happens after the incident is contained and handed off to the ISO, the overall incident response process proceeds smoother.  In other words, knowing that the ISO may call an emergency incident response team meeting gives a branch manager a sense of what is going to happen.

To summarize:  if you want to grease the machinery of incident response, teach your employees Broadcast Awareness!

Dan’s New Leaf is a fun blog to inspire thought in the area of IT Governance.